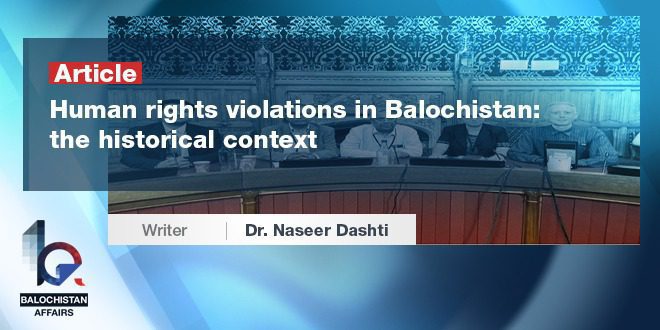 During the last seven decades, the Pakistani state committed massacres and extrajudicial killings in Balochistan as a policy matter. Since 2002, these actions have increased exponentially. With the help of their auxiliary militias, death squads and religious outfits, military and civil intelligence agencies are involved in forced disappearances and illegal detentions of Baloch intellectuals, social personalities, and political activists in thousands. Dumping bodies of thousands of Baloch social and political activists with visible marks of inhuman torture has become a routine matter in Balochistan. The verified numbers of extrajudicially killed and missing persons during the last 17 years exceed 15 thousand. Nearly half a million people have been internally displaced. Thousands have fled and sought refuge in various countries, including the UK.

Why is all this happening in Balochistan? To understand this, understanding the context of the Baloch-Pakistan relation is imperative.

After the second world war, the British Empire withdrew from India. However, to safeguard the strategic and economic interests of the west from a cold-war perspective, it hastily implemented its long-drawn strategy of dividing India and creating a client state. For this, the colonial administration used the fallacious theory of the Muslims of India being a nation. The officials of colonial office tasked the pro-colonialist Muslim League party to demand a state out of India for the non-existing nation of Islam. Amazingly, the Christians, the Buddhists, and followers of other religious faiths in India were not declared nations and no state was created for them. The creation of Pakistan came out of the blue for the region’s nations, which were aspiring to be independent after the British withdrawal. Instead, for the Baloch, Sindhis, and Pashtuns, only there was a change of colonial masters. They were incorporated against their will into the client state of the colonial power.

Pakistan is a purposely created artificial state from a cold war perspective. It is perhaps a unique example in the world’s political history. First, it is unique in that the colonial administration manufactured the ideology of this newly independent country. Second, it is unique because the party demanding independence was made of Indian lackeys of colonial administration. Third, it is unique in that the leadership of the newly independent state was imported from elsewhere. Fourth, it is perhaps the only example in political history that Urdu, the declared national language was not the language of any constituent nation of a newly liberated country.

With the state ideology having no roots in the society and the state itself facing a crisis of legitimacy, the establishment employed numerous socio-cultural, political, and militant strategies to eliminate everything that might suggest a multinational picture for the state. The use of state violence became necessary because the ruling Punjabis had nothing in common with the Baloch or other national entities in Pakistan except their religious beliefs. In this context, the state created a ramified military organization with its affiliated political and religious outfits to combat the national aspirations of the subjugated nations.

In the wake of the British withdrawal from India, the Baloch state, called the Khanate of Kalat, declared independence on June 11, 1947. In an agreement called the “Standstill Agreement” and signed on August 4, 1947, the future state of Pakistan recognized the Khanate as an independent sovereign State. However, after nine months, it invaded and annexed the Baloch state on March 27, 1948.

The forceful annexation of their state and various subjugation and assimilation strategies of Pakistan were unacceptable to the Baloch. As a result, the state adopted multiple strategies to counter the Baloch national aspirations, which resulted in many political and armed resistance movements with much bloodshed.

The school curriculum introduced by the state blatantly fabricated historical facts, human social values, and regional realities. The emphasis was on the fallacious concept of Islamic nationhood, negating all national identities. The teaching of the Balochi language is banned in schools. Notorious plunderers and savage warlords of the Middle East and Central Asia during the Middle Ages who carried out acts of genocide on the Baloch and other peoples in the region are being portrayed as national heroes. The imposition of socio-cultural values of a group of north Indian migrants over cherished Baloch socio-cultural traditions is one of the ugliest among the assimilation strategies.

Socially, the Baloch identity regarding their religious beliefs is of religious tolerance. The Baloch never politicalized religion which always remained in the personal sphere. However, to dilute the Baloch national resistance, Pakistan systematically adopted policies to introduce religion as a political factor in Baloch society. The process of making the Baloch perfect Muslims began in the 1970s. Throughout Balochistan, the state established a web of mosques and religious schools. From these schools’ various extremist religious groups were created to carry out subversive activities against Afghanistan or India and to be used in the targeted killing of Baloch nationalist activists.

After the 9/11 incidents in the USA, the Pakistani establishment found the unconditional and all-out support of the civilized world as an opportunity to complete its long-term plan of doing away with the Baloch national question. In December 2005, the Pakistani ruler General Pervez Musharraf referring to the Baloch question told the media in Lahore that this time it would be a fight to the finish. Consequently, the Baloch and Pakistani security forces became involved in a head-on collision. As a result, a bloody and protracted resistance movement began in Balochistan with tales of much horror and brutalities.

Enforced disappearances, unlawful custody, dumping of mutilated bodies and inhuman torture of the Baloch political activists are part of the strategy to crush the Baloch national aspirations. Compared to all previous active hostilities with Pakistan, the ongoing conflict has brought much devastation to the Baloch, with the highest casualties, disappearances, and population displacement.

Since 2005, reports and claims by certain Pakistani government officials, the Baloch nationalist parties, the Baloch human rights groups and international human rights organizations present a gruesome picture of the situation in Balochistan.

The dumping of mutilated bodies of missing persons has been daily for years. The security agencies physically eliminate the Baloch society’s cream in a planned way. They carry out the abduction of political activists, keep them in illegal detention, inflict inhuman torture and then dump their mutilated bodies in remote and desolate areas. They are doing this in collaboration with their local agents. These agents are primarily anti-social and extremist religious elements organized by state security agencies in various parts of Balochistan and used in identifying, kidnapping, and dumping bodies of the Baloch nationalist activists. They are popularly known as the army’s ‘death squads’.

Various human rights organizations, including the Human Rights Watch, reported that there had been an upsurge in the number of missing persons and mutilated bodies in recent months. According to data collected by the Baloch Human Rights Council (BHRC), the “kill and dump policy” had brought brutality in the province to an unprecedented level. From January to June 2022, 201 persons became the victims of enforced disappearances. In addition, security forces extrajudicially killed 59, and their mutilated bodies were discovered in various districts of Balochistan.

Since 2000, several new cantonments have been established in Balochistan, making the number of cantonments six, practically converting Balochistan into a war zone. After every 25 Kilometres, a checkpoint has been established, manned either by regular army units or paramilitary forces. But Pakistan is waging its war in Balochistan without witnesses. Balochistan has been an undeclared no-go area for the international media and human rights organizations. Even the diplomats of donor countries, on whose donations Pakistan has sustained itself, cannot go to the interior of Balochistan. As a result, there has been a total blackout of what is happening there. 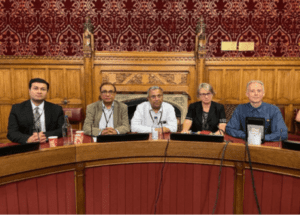 The gross human rights violations are bringing much devastation to the people. Pakistan uses force with Jihadist zeal to counter the Baloch resistance against subjugation. According to the United Nations General Assembly resolutions, many actions of Pakistani security forces and its auxiliary organizations come into war crimes, genocide, or crimes against humanity.

(The article is the excerpt of the opening speech made by Dr Naseer Dashti during the event to discuss the human rights situation in Balochistan in the Houses of Parliament on July 12, 2022, hosted by Baroness Natalie Bennett) 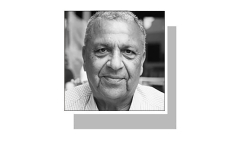