Taliban are ready for peace and they have suffered as well: Shah Mahmood Qureshi 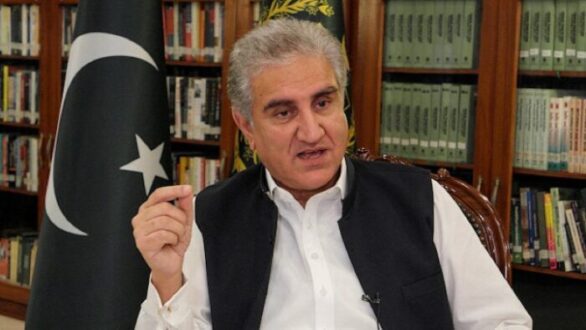 Pakistan Foreign Minister Shah Mahmood Qureshi said the only way forward toward peace in Afghanistan is through reconciliation, coexistence and talks among Afghans, and he reiterated that Islamabad’s approach toward its neighbor has changed and it will favor a future arrangement that is acceptable for all Afghans.

Talking to TOLOnews in an exclusive interview at his office in Islamabad last week, Qureshi said there is a need for flexibility from Afghan leaders to move the peace process forward.

Qureshi rejected Taliban sanctuaries in Pakistan and said most of their leaders “are in Afghanistan” and when asked about the presence of Quetta and Peshawar Shuras, or councils, he denied the existence of such institutions in Pakistan and said he “has been hearing of these terms for now decades.”

Asked whether Taliban are “funded here in Pakistan,” Qureshi said: “These are very–those many things that have been going on for years. You’re stuck in the old groove. Get of out that groove, please. Get out of that groove. Now, listen, if you remain stuck in this, believe me you will not be able to travel far. And we want you to travel far. We want reconciliation and peace.”

Qureshi mentioned Doha as the best place for engaging in talks with the Taliban–even between the leaders of both sides–but said this will not happen unless there is willingness from both sides.

“What has changed is Pakistan’s approach,” Qureshi stressed. “We want Afghanistan to be peaceful and stable because we feel that a peaceful Afghanistan, a stable Afghanistan, gives us the regional connectivity that is required.”

“If we’re looking for economic security and if we’re looking for investments and the promotion of bilateral trade and regional trade, it can only come with peace, and peace and stability Afghanistan is not just Afghanistan’s requirement, it’s Pakistan’s desire as well. You know, we benefit from it,” he said.

According to Qureshi, the world’s approach has changed as it does not hold the view that peace can be achieved through a military solution.

“We have been advocating for years that there is no military solution to the Afghan conflict. What has changed is this new approach that what is required is a negotiated political settlement that we were advocating. This international environment has changed and that has been the environment more conducive for peace today than ever before.”

In response to a question on what type of a government Pakistan would favor as an outcome of the peace process, Qureshi said it is a decision to be made by Afghans.

He said that Pakistan suggests an inclusive system that would be helpful in reconciliation and promoting the peace process.

When asked about the status of the Afghan peace process and progress in this respect, Qureshi said it should be asked of Afghans.

“The peace process has to come to its logical conclusion through an intra-Afghan negotiation. We’re not sitting at the table with them. Wherever required, we’ve facilitated. We cannot decide for you. It’s the Afghans that will sit and decide what they want,” he said.

Qureshi said that Taliban leaders and those who have attended the Doha negotiations, including Mullah Baradar, have been visiting talks “for facilitating the peace process,” and he reiterated that most Taliban leaders “are in Afghanistan.”

Referring to Taliban leaders, he said, they’re in Afghanistan and the Afghans “need to engage with them.”

Qureshi said that Pakistan has “always advocated reduction in violence leading to ceasefire because we genuinely believe that you cannot have negotiations and violence go hand in hand.”

Qureshi indirectly hinted that he does not see the Taliban as responsible for the high level of violence in Afghanistan.

“Who is responsible for that?” Qureshi said when he was asked about the rise in Taliban violence. “If you try (to) create this impression that the violence is high because of Taliban, again, that would be an exaggeration.”

He said there are other elements like Daesh “who are playing the role of a spoiler.”

He said that violence has to go down and the process of peace and negotiations has to accelerate.

He said he thinks that the Taliban are ready for peace and that “they have suffered as well.”

Qureshi said that he has talked with those Taliban leaders who are in talks with Afghans.

Qureshi said that Pakistan remains concerned that Afghanistan will be plunged into another civil war, but he hopes it will not happen.

“That’s why I’m saying, please sit together and carve out a way forward, you know, which is coexistence, reconciliation. Accept each other. You have to accept each other,” he asked.

In response to a question about whether the country is moving toward a civil war, Qureshi said it depends on the Afghan leadership.

“Bilateral relationships are mutual. Both sides have to see a benefit in it, and we do see. We see benefit in good relations with Afghanistan,” Qureshi said.

But he added that “Pakistan is not responsible for the squabbling that is going on in Afghanistan.”

“Pakistan is not responsible if the Afghan leadership cannot sit and work out a peace deal. We’re not responsible for that. It’s yours. We’re saying we want to be helpful.”

Regarding the Durand Line, specifically, whether it is a recognized border, Qureshi said: “If we want to move ahead and sort of coexist as good neighbors that we desire then I think let’s accept the international border.”

Qureshi said that officially India has four consulates in Afghanistan, but indirectly hinted there are more unofficial ones.

“At times we feel that you don’t share a border with India. Obviously, you have sovereign relations and you have bilateral relations and you have every right to have sovereign and bilateral relations with India. You trade with India, they come and carry out development work there. That’s fine, that’s completely fine with us. But at times we feel that their presence is perhaps larger than it ought to be because they don’t share a border with you.”

He said it bothers Pakistan if Afghan soil is used against it by India.

He said that under Prime Minister Imran Khan, they took initiatives toward peace with India, but it was not reciprocated by New Delhi.

“They took steps and measures that vitiated the climate,” Qureshi said, referring to India. “Despite that, we think that the situation in occupied Jammu and Kashmir is a political situation, it is being mishandled.”

Qureshi meanwhile rejected reports about Pakistan’s willingness to allow US bases to operate on Pakistani soil after American forces leave Afghanistan. He said it will never be possible.

Regarding US withdrawal, he said the United States believes that it has achieved its objective in Afghanistan and that it is leaving the country.

Bill moved in US Senate to sanction Taliban and its supporters