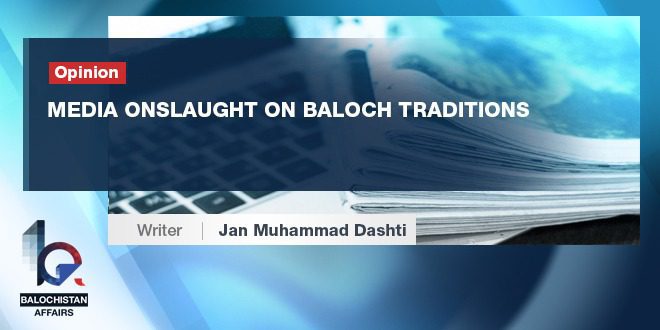 An informative and critical media is a necessary condition for the establishment of democracy and decency in a civilized society. In a democratic society, the actions of the government and the state, and the efforts of competing parties and interests are to be underpinned and legitimized by critical scrutiny and informed debates in media. The freedom of expression and the right to know in a Pakistani context is a misnomer. The Pakistani media mostly portray issues that do not have any relevance to the people’s thinking or represent the basic essence of the traditional values of different national entities in Pakistan. It has a long and torturous history of defacing the Baloch history, culture, and traditions in more than one way. The media, the prints as well as the electronic, have not been able to detach themselves from the state intelligence agencies and continuing to falsify and distort the history and culture of our people.

There is a close connection between the subcontinent’s struggle for political and social emancipation from British rule and the origin and development of the Pakistan press. During colonial years, in India, one section of media was engaged in a continuing struggle against British authority, in favor of the salvation of Indian masses while another section of media was characterized by its loyalty to the colonial power and Indian Muslims mostly owned this section. After partition, this press also migrated to Pakistan and become the main supporting pillar of the Punjabi-Muhajir axis who had replaced the colonial masters in this part of the subcontinent.

Media hypocrisy and dishonesty started with the inception of the religious state. The Pakistani state manipulated the people’s right to know and their right to express their opinion. It manifested itself as a sustained campaign of constructions and open or discreet censorships. Perhaps it was imperative in the background of the creation of the Pakistani state. Pakistan was created by the amalgamation of various regions of the Indian subcontinent having distinct socio-cultural orientations. It is an undeniable fact that the different nationalities comprising Pakistan except that the people of East Bengal were not enthusiastic about the newly created religious state. This fact caused anarchy and a leadership vacuum, which was filled initially from the Indian immigrants and personnel of colonial administration from the north Indian Muslim community, which later aligned itself with the emerging Punjabi military establishment to form the ruling elite of this state. To justify the rule of a group of people having no roots among the people of the land, the ruling elite with the help of a docile media started the destruction of truth. This sustained campaign resulted in the evaporation of the qualities of honesty and integrity from our political and social life. It was the beginning of the replacement of finer elements of our culture and society with hypocrisy and utter deceitfulness.

In Pakistan, we have strange sets of rules to govern our social behavior, our political attitudes, our religious beliefs, and our media management policies. When we speak about the freedom of the press or freedom of expression we will be discussing a country where fundamental rights of peoples are not guaranteed or where adhering to or loving cultural and traditional values of different cultural identities are considered as disloyalty to the state. When we converse about national integration we will be talking about the ascendancy of sheer misconceptions and mistruth which is created and sustained through media campaigns disregarding the national aspiration of different nationalities that comprise this region. When we talk about freedom of media, we will be talking about a media which most often function under official patronage and as a tool for coercion and blackmail; a media which is very much oblivious of the real issues facing the peoples of different federating units of this country.

In present-day Pakistan, barring only a few newspapers in various languages that are taking a factual secular-democratic and nationalistic stand, almost everything which relates to media is controlled by the state establishment. This controlled media is coming out increasingly in support of the politics of establishment, dictatorship, and religious extremism. Another section of the media is openly controlled by the state intelligence agencies and on occasions, distinguished itself as a so-called ‘Islamic Media’ is also in the forefront of misleading the nation and always reflects lies and mistruth.  The fact is that the guardians of Pakistan ideology control the media in its entirety, which is to submerge the national identity of different nationalities into a Pakistani Muslim identity.

From a Baloch perspective, the media had been engaged in falsifying the Baloch history, the Baloch traditional values, and the Baloch political struggle for national rights.

The Pakistan media is responsible for grave historical misrepresentation of facts and events and in misguiding our generations, elements of our cultural and historical heritage have no mention in Pakistani literature and media. Textbooks in schools and colleges hardly refer to many thousand-year-old national history and traditions of the Baloch people. The Baloch culture and history are either defaced or just ignored. One cannot understand why Pakistani ideologues and rulers are shy of our rich and glorious past. The Baloch fought battles against the forces of Ahmed Shah Abdali and Mehmood of Ghazna’s, Mughals and others that invaded the Baloch land and killed thousands of our people through treachery while our media men glorified these plunderers as the greatest Muslims while the Baloch think of them as devious robbers and plunderers. In the history books and media of this country, there is no mention of Baloch history before the inception of Pakistan neither it is being mentioned how the Baloch state was merged with Pakistan.

The Baloch social system and its entire cultural traits which were beholden by the Baloch people to their heart were attacked by newspapers from all directions, with total immunity. The media has been engaged in the inappreciable systematic onslaught of painting the Baloch culture and traditions as archaic and inhuman. It has been busy painting finer elements of the Baloch cultural traits and its finer points in their social system as a callous and draconian tribal system. The culture and traditions of our people are constantly under criticism by a group of people who have no cultural identity of their own. On the religious front, the state-controlled press in Balochistan had been playing a very obnoxious role in trying to foment Zikri-Numazi row between two sects of Muslims in Balochistan with the help of some religious fundamentalist parties funded and patronized by state intelligence agencies.

The state-controlled media has assumed for itself a multi-dimensional task of not only falsifying our traditions but also corrupting our language on a massive scale. The programs being recorded and telecasted in PTV and other officially sponsored channels have the least relevance to our culture and are tuned to the general perception of Pakistani policy objectives towards the Baloch. In the majority of the programs, even telecasters do not know the language or any knowledge of various accents of Balochi. The language being used for the Balochi programs do not contain more than 30% words of Balochi. The thousand years old Balochi language is therefore being corrupted purposefully.

In a political context, inspired news items and stories are timed and planted in the media to influence decision-making by the central government controlled by the Muhajir-Punjabi axis. For example, when the state under Zulfiqar Ali Bhutto decided to punish Balochistan in the early 1970s, the newspapers “discovered” many “criminal acts” including “private jails” of the respectable Baloch leaders and tribal chiefs who were opposing the discriminative policies of the state vis a vis Balochistan. The media under the state influence are painting non-entities in the political field in Balochistan and through them attacking our system and traditions with open imperviousness. The so-called national press has always been in the vanguard to tarnish the image of respected Baloch political and social leadership in an attempt to undermine the national resistance of the Baloch against suppression and subjugation. Different sets of political attitudes govern different provinces. While people of Punjab are “patriotic by descent”, the people and their leaders in Balochistan are easily dubbed as anti-state or traitors.

Waja Jan Dashti is a renowned intellectual, writer, and prominent leader of the Balochistan National Party. His 17 years old article is still relevant in the context of present-day Pakistan. This article was first circulated by BNS in 2003. We have taken the article from the book: The voice of reason, published by Asaap publications in 2007.