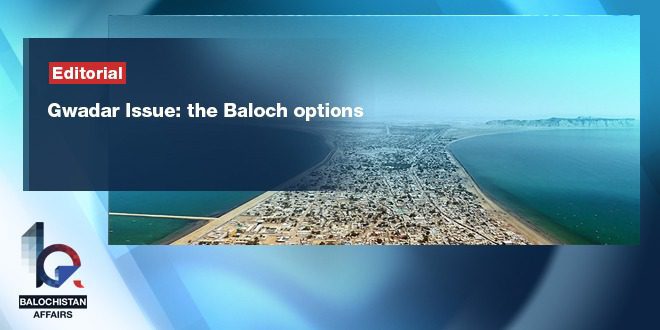 If the announcement of declaring Gwadar as the capital of a non-existing southern Balochistan is to pave the way for the ultimate division of Balochistan, then this is a decisive moment for the Baloch nationalists. They will certainly react. Balochistan National Party has already announced its decision of holding protest rallies. However, it is to be seen that in what way they react and how effective their resistance in opposing the division of Balochistan will be?

The political situation in Balochistan has not been favorable for the nationalist forces for the last 15 years. With the advent of CPEC, the issue of land grabbing by the army in the Gwadar district and the issue of leased lands with Pakistan Petroleum Limited in Dera Bugti surfaced in the early years of this century. The Baloch leadership and their political organizations united in a movement to safeguard what they termed as saving the coast and resources of the Baloch nation. A four-party alliance comprising of Balochistan National Party (BNP), Jamhoori Watan Party (JWP), National Party, and supporters of Nawab Khairbux Marri in Haqtawar started a mass campaign against the destructive state policies in Balochistan. With the gaining of momentum of this movement, the military establishment reacted harshly. After threatening the Baloch leadership with dire consequences, the Martial law administrator of the country, General Musharraf ordered a ruthless military operation against Baloch nationalist forces. Nawab Akber Bugti was murdered by the army commandos, Sardar Akhtar Mengal was arrested, and Nawabzada Balaach Marri was killed in mysterious circumstances. Ghulam Muhammad and other BNM leaders were ruthlessly killed. Many political workers and leaders went into exile. Followers of Nawab Bugti, Nawab Khair Bux Marri, and the Baloch National Movement started armed resistance against the military incursions in various parts of Balochistan. After the martyrdom of Nawab Akber Bugti, JWP became irrelevant in Baloch Politics, Nawab Khair Bux Marri announced his disgust with political parties, and BNM and its student wing BSO (Azad) abandoned the political arena by declaring open support for the armed resistance.

The state establishment’s response was ruthless on both armed resistance and the political front. Kill and dump policy took a heavy toll on resistance fighters and supporters. Hundreds were killed, villages were destroyed, and thousands are still missing. On the political front, the murder of Nawab Akbar Bugti, the murder of many BNP cadres and the long absence of other BNP leaders from Balochistan, banning and crushing of BNM and BSO (Azad), and the political inactivity of Nawab Khairbux Marri created a political vacuum which was filled by state lackeys. Political non-entities, drug traffickers, and social outcasts became the new political breed in Balochistan.

In dealing with the present issue of eminent division of Balochistan, the options remain armed resistance and political agitation. Although Pakistan claims to have dealt death blows to the Baloch armed resistance, the reality is that the armed resistance has matured with experiences gained in the field and many observers believe that they are in a position to disrupt any plan of division of Balochistan. Politically, with the absence of Nawab Bugti, Nawab Marri, and the practical inactivity of Sardar Mengal because of his age, Balochistan National Party appears to be the only significant voice for the rights of the Baloch people on the ground. National Party is also trying to re-enter the nationalist fold after hobnobbing with the establishment for many years. Talks of an alliance of nationalist forces to block the division of Balochistan are being heard from various political and intellectual quarters to safeguard the territorial integrity of the Baloch land. However, what will be the shape of this alliance and to what extent it will be allowed to mobilize the masses will be the real test of the present Baloch leadership.

Editorial: Gwadar as the capital of southern Balochistan: possible objectives